‍The braised beef instant noodles are fermented with the smell of feet, the thick smoke that spreads out after Yuxi is ignited, the crackling keyboard sound and the "fuck you horse" of the internet addicted teenager... This was a corner of the Internet cafes in mainland China before 2010. 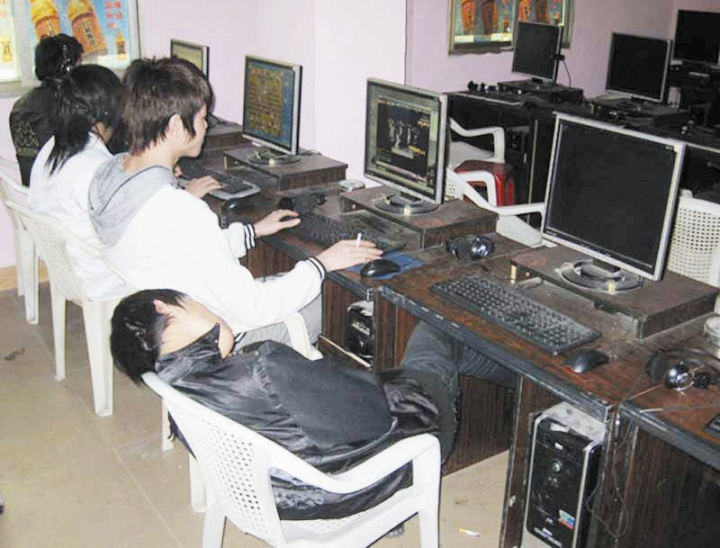 And in Japan, which faces China across the sea, there are also a large number of people who spend time in Internet cafes, who are also despised by society. They represent the opposite of Japan's glamorous society and are named "ネットカフェ refugees", that is, refugees from Internet cafes.

And our story today is told from the bottom group of people hiding in Japan-"Internet cafe refugees".

In 1989, Japan's bubble economy reached its peak. That year, Kosuke was born in a certain prefecture in Kanto, which happened to coincide with Japan's depression.

The great age is reflected in Kangsuke, that is, his mother died of drinking and his father Huaguang Kangsuke's insurance money then disappeared. To

After graduating from high school, Kangsuke had to choose to work. In the end, the money was scammed, and he was helpless and took a pitiful little money to live in a cheap Internet cafe. To

So he became a refugee from an Internet cafe.

Kangsuke is not a special case. "Internet cafe refugees" are not a curious ranking, but a huge social group. To

There are Sanhe Gods in China and Internet cafe refugees in Japan.

For the refugees who have fallen into the Internet cafes, eating is the number one event. 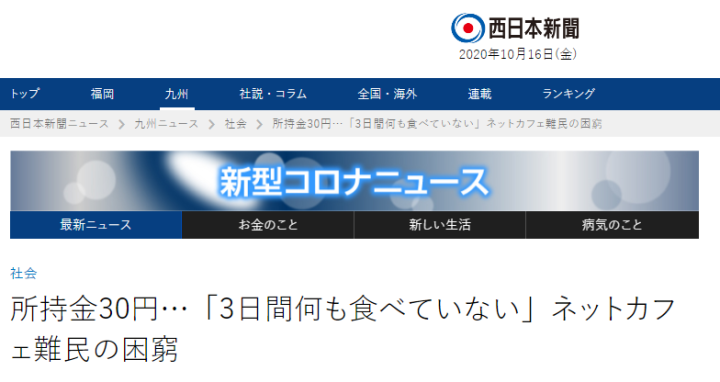 In a life where there is a meal but not a meal, their main food is the expiring bento from the convenience store.

The cup noodles that need to be paid are called luxury meals by them.

Experienced Internet cafe refugees will find other places to pass the time when they are not working during the day or when they cannot find a side job. For example, going to a bookstore to read comics can save a lot of money.

When the heavy rain hits, I can only find a corner to wrap my clothes to sleep. Watching the video, I feel like I'm about to jump off the building crying.

The popularity of Internet cafe refugees originated from the 2007 Japanese TV broadcast of the documentary "Internet Cafe Refugees: Displaced Poor People". To

This invisible group began to enter the public's sight, causing an uproar and becoming a Japanese buzzword in 2007.

According to data released by the Ministry of Health, Labour and Welfare in 2010, the number of homeless people in Japan in 2007 was approximately 18,564.

Assuming that these people are stacked on their backs, based on the average sideways width of an adult of 20 cm, they can stack up to 3,712 meters, which is equivalent to the height of a Mount Fuji (3776 meters). Among the 18,564 people, the number of "Internet cafe refugees" is about 5,400, most of whom are unemployed and informal workers (temporary workers), with a per capita monthly income of 40,000 yen (about 2,600 yuan), 75.5% of the people Mainly engaged in waste recycling. To

The ages of these people are mainly concentrated in the two major areas of about 30 and 50, and they are basically the direct experience of the bubble economy and the children of the experience. 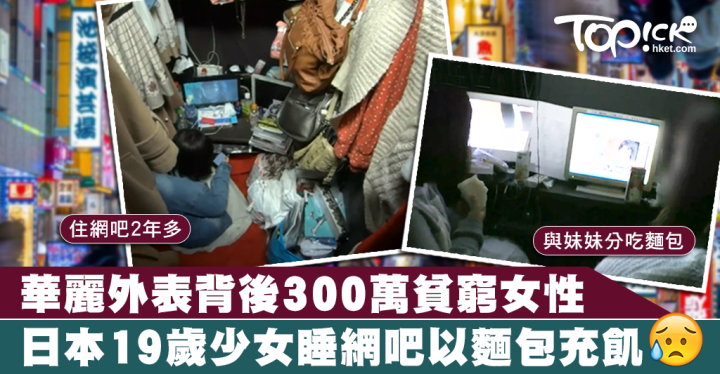 Even if the Internet cafes patronized by "Internet cafe refugees" include services such as PC surfing, comic reading, food and lodging, and cleaning and bathing, it seems very good.

However, Internet cafes still contain many risks, such as the spread of infectious diseases and violent crimes.

"Internet cafe refugees" have no fixed residence for a long time, and their resident records will be deleted from their original location.

This will directly affect their daily lives, rent and buy a house, and even lose administrative services including "life protection" (minimal security) and the right to vote on behalf of the glory of Western democracy. 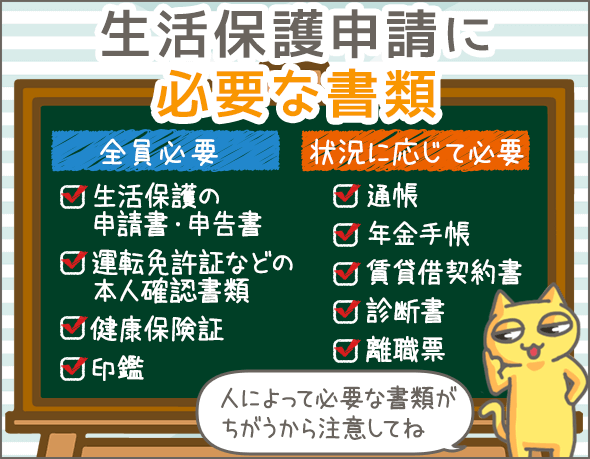 "Internet cafe refugees" have been a serious social problem in Japan since they were exposed. 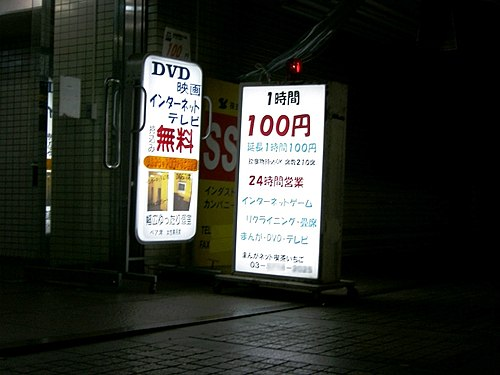 This is the quagmire of Japanese Internet cafes, and it is difficult for those caught in it to escape. To

In order to solve the situation of "Internet cafe refugees", Japan has worked both online and offline and thought of many countermeasures. To

In 2008, the Ministry of Health, Labour and Welfare set up an employment support commissioner at the Public Employment Security Office to try to solve the employment problem of refugees in Internet cafes

In the same year, Tokyo opened the tokyo-challenge website to provide housing and employment consultation and special assistance for Internet cafe refugees

In 2013, Japan promulgated the "Independence Support Law for People Living in Poverty" to provide further protection for the poor

However, when people thought that the group of "Internet cafe refugees" would gradually disappear, reality gave everyone a big slap.

Just as people gradually forgot about this group, a documentary brought their attention back to the group of refugees who were dormant in Internet cafes. To

The popularity of the documentary in Japan is no less than that of NHK's "Sanhe Great God" in China.

The most representative figure is Sakai Tadayuki.

He worked 120 to 200 hours of overtime a month, and he suffered from depression. To

Because of his autistic personality, he rarely participates in team building, so he was rejected by his boss and colleagues and left.

In the end, it was completely reduced to a combination of social animals × Internet cafe refugees.

The documentary's winning is only a warning bell.

The number of refugees has not decreased, but has doubled. 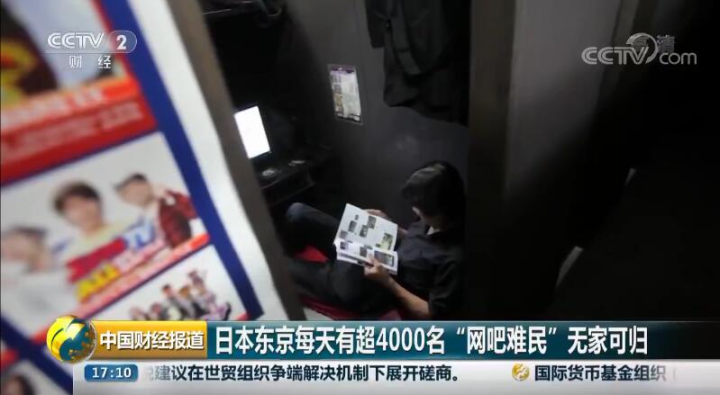 If it is only occasionally disclosed by the media, the "Internet cafe refugees" who are trying to hide their identity as homeless people will never stand up. They will only hide in the small compartments of the Internet cafe. To

But in 2020, with the emergence of the new crown epidemic, Internet cafes across Japan closed, and Internet cafe refugees eventually lost their "homes." 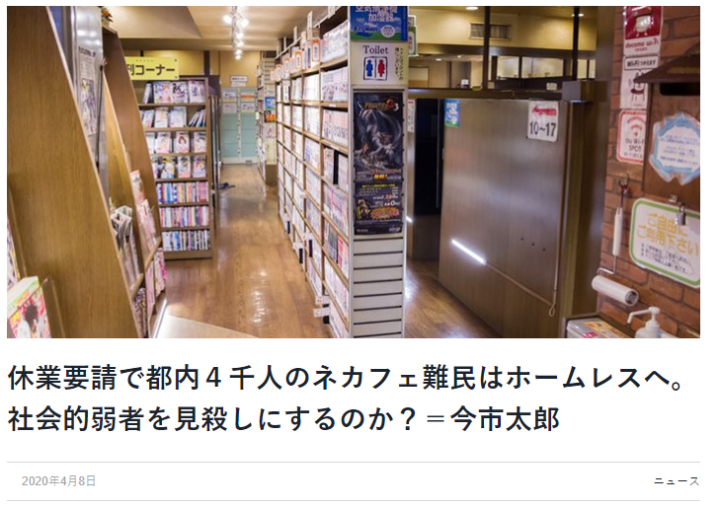 Thousands of people have nowhere to live and hide at most in parks and bridge caves, but they are forced to the streets because of their lack of savings, to ask the government for a meal. 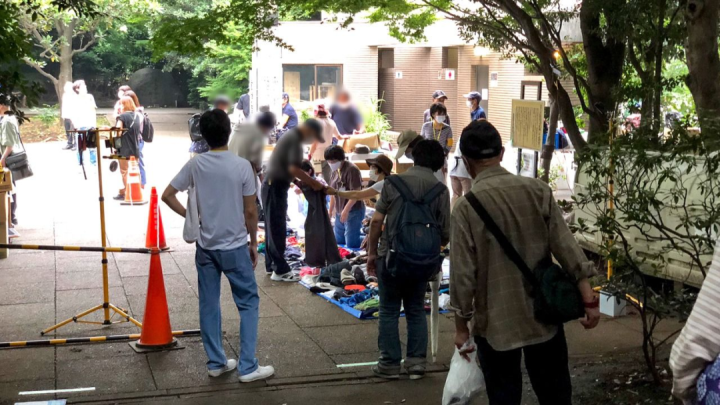 These refugees from Internet cafes were forced to gather. Just like the ant colony was blown up by firecrackers, the black ant colony crawled out of the cave of Japanese society. To

Under this test, the Japanese government replaced God and temporarily took over their lives. 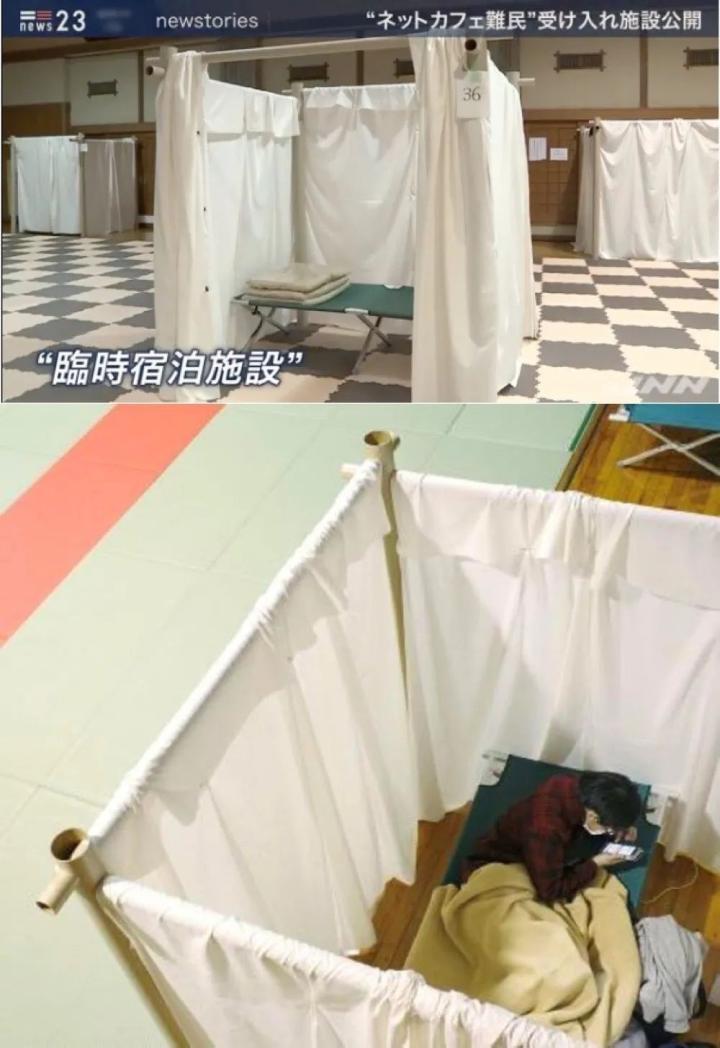 But wanting to move in is not that simple. To

Since the Ministry of Health, Labour and Welfare proposed to open accommodation facilities in early April 2020, in this month, only 651 people in the entire Tokyo got accommodation arrangements, which means that most people are still wandering on the streets.

More refugees from Internet cafes were censored during identity verification. 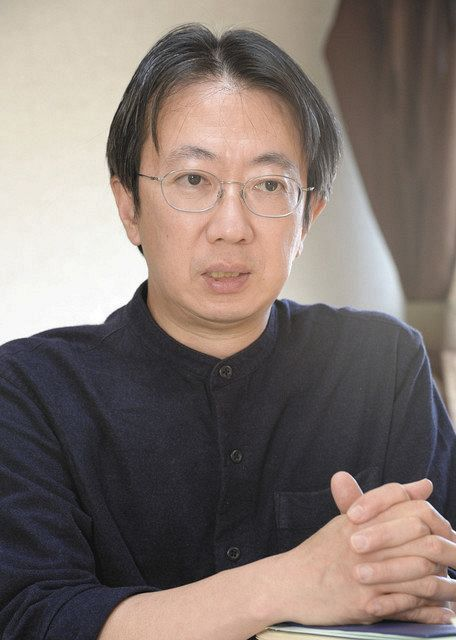 And it is the tokyo-challenge website set up by Japan for refugees from Internet cafes in Tokyo as mentioned above. 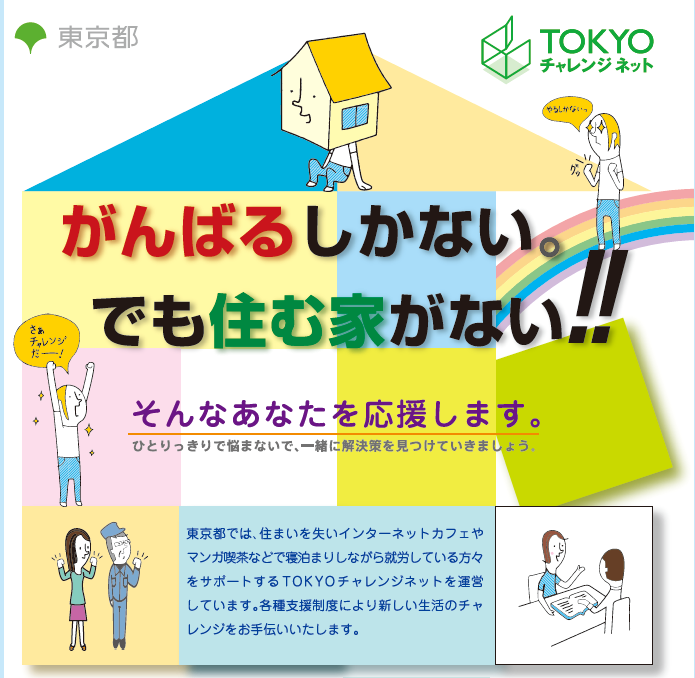 In short, after confirming your identity, we will provide you with housing.

Normally, there is no problem with this process.

However, during the epidemic, the eligibility for Internet cafe refugees to obtain housing relief is to stay in Tokyo for more than 6 months, and to ensure economic independence and housing stability within three months.

How many Internet cafe refugees can guarantee that they will live independently and have a stable housing in Tokyo within three months under the social tide of dismissing temporary workers during the outbreak of the new crown in Japan in May?

The loopholes in this system are not limited to Japan's performance during the epidemic. As long as you are willing to pick the words, it is not difficult to find that Japan has always been unfriendly to Internet cafe refugees.

Internet cafe refugees are still laborers in essence, and when it comes to Japanese laborers, one has to say a key word-social animals. To

The term "community animal", which emerged in Japan in the 1990s, embodies the sharp contradiction between the Japanese proletariat and the bourgeoisie.

After decades of evolution, the worst-hit areas for social animals have moved from Japan.

Every spring, Japanese workers demand that they hold "Spring Fights" in order to fight for higher wages and improve working conditions.

Take Chundou as an example. Why can such a labor movement that seems to make Japan a representative country of East Asia in the European and Americanization of the labor system create "Internet cafe refugees"?

But the Spring Fight system is not a panacea. It has a very special rule-informal members cannot participate.

This also means that informal employees with very poor treatment cannot enjoy benefits such as wage increases, as if they have been eliminated from the ranks of the Japanese proletariat.

In Japan, more than 38% of workers are informal employees, and Internet cafe refugees are one of them. Internet cafes, which seem to be the last pillar of Japanese informal employees, are not cheap.

In 2008, NHK calculated the charges of Internet cafes in the program "Poverty Business" (Aid or Exploitation of "Poor Business"): 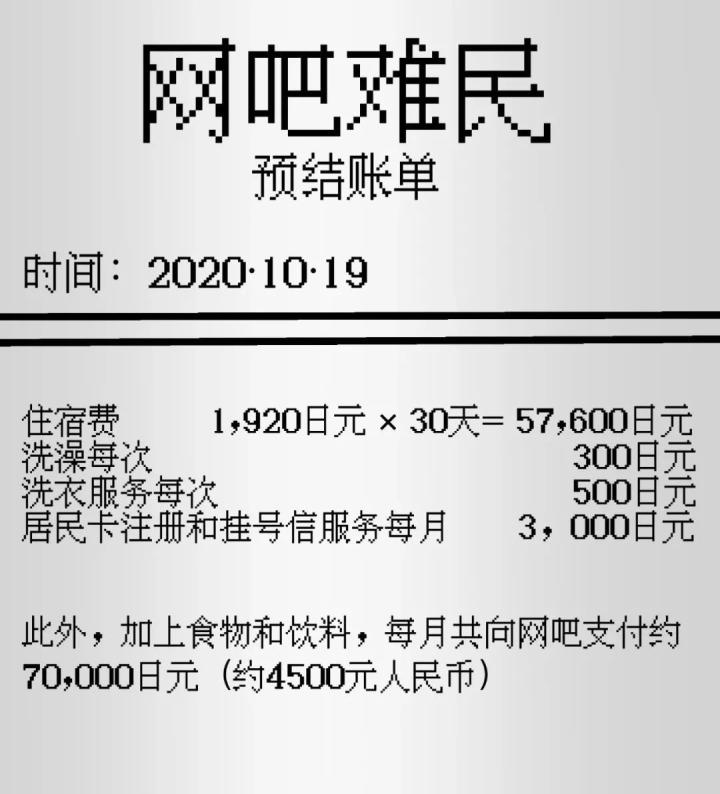 And 70,000 yen per month, far surpassing the average monthly income of 40,000 yen for refugees from Internet cafes at that time.

Internet cafes are not the final destination of refugees, they are just qualified businessmen.

Due to the increasing number of Internet cafe refugees pouring into Internet cafes, Japanese Internet cafes are more like low-profile capsule hotels, but Internet cafes cannot meet the requirements of disaster prevention management and room size of the Hotel Business Law. 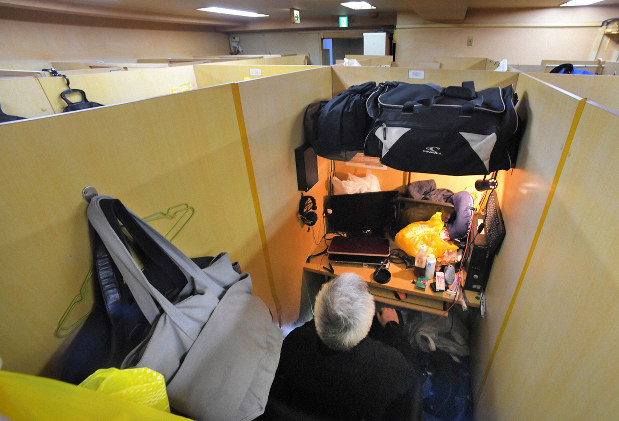 The Internet cafe industry has made great strides by drilling up legal loopholes and ditching refugee wool.

Years later, where will the Internet cafe refugees such as Yasuke and Tadayuki Sakai appear in this article? To

As Japanese rat people, no one can determine their future, including themselves. 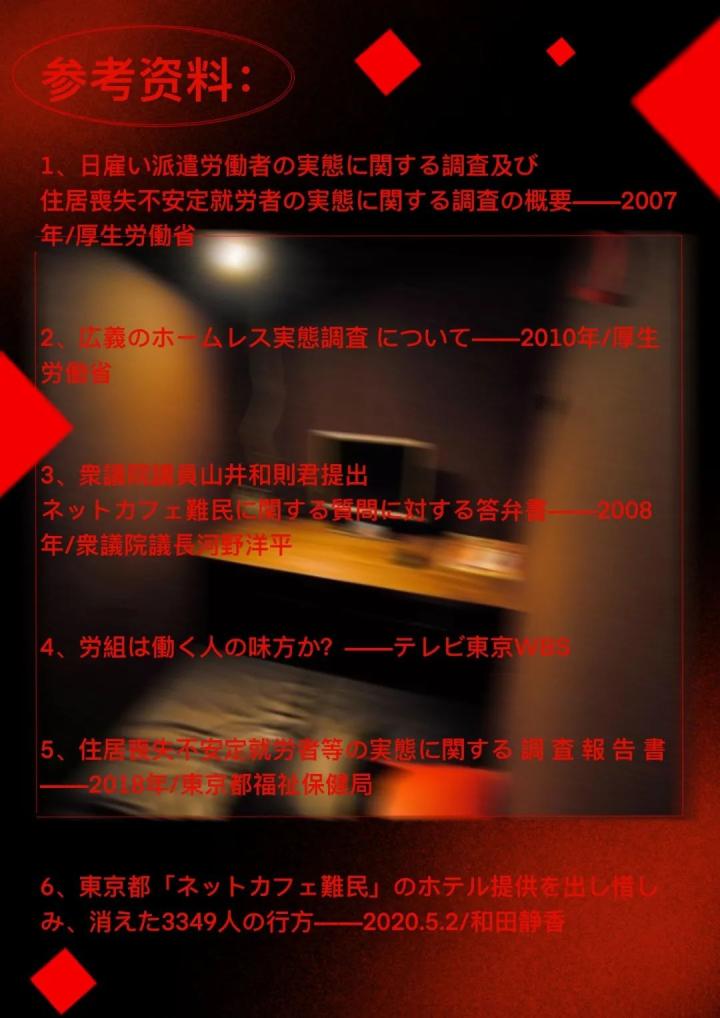